Hamlin didn't have a fire company for a long time. All they had was two wheeled hose carts. I belonged to one of those hose companies - Hydrant Hose Co. #1. I joined in 1923. They bought those carts and started a volunteer company when the water line was put through to Brockport in 1914. The hydrants were put on Brockport's water line and when Germ Elliot's store burnt, they opened the hydrant up so quick that it cracked the base of the pump. Then after that they started building the Hamlin water line on the opposite side of the road and they had to move all the hydrants over to that side of the road. After that, Hollwedels bought out the plant where Duffy Mott is. They had a kiln burn one night and they put two lines of hose on and the water came out and just dropped straight down out of the nozzle. No pressure! Then they investigated to find out why. Brockport had put a piece of three-inch pipe into the six-inch line and it reduced the volume coming in so much we wasn't getting water. Then the insurance company got after them and made'em take it right out of there!

The other hose company was the Hamlin Hose Co.#1. Hamlin Hose Co. #1 held its first meeting on July 24, 1914, according to its minutes, and elected Harry Burke its first president. They both started at the same time. The Hydrant Hose Co. was for the north part of Lake Road, around the (train) station. (Singleton was in on that, too!) They kept their hose cart in Penner's shed. The Hamlin Hose Co. was down around Hamlin Center and they kept their hose cart near the corner of Routes 18 and 19, north of the Baptist church, across from Felts' Hardware Store.

The fire companies got together to hold the "Field Days". They had the first one the year they started up (1914).

In the beginning, when they had the bucket brigade, the fire alarm (if you could call it that) was at T.O. Swanson's barn. There were two posts there that held a locomotive wheel and they'd hit that with a sledgehammer like a gong when there was a fire. Later, they moved that down to the blacksmith shop. They finally bought a bell and put it on top of the telephone office.

"I was born in Hamlin in 1906. When the new fire company started in 1928 "Dutch" Seaman and myself were the first young fellas to join the new company. Then Roy Wolf joined and I believe the next one was Chuck Lynch. Chuck was secretary. When the new company was formed the meetings were held in Singleton Hall, up over Dollard's block of stores in the old dance hall there.

You see, there were two fire companies, Hamlin Hose Co. #1 and the Hydrant Hose Co. #1. And when the new fire company started, the two companies joined together. They bought a lot from Fred Fishbaugh in June 1929 and then they moved the old #6 school down for a fire hall. At that time they still had an old Model 'T' chemical truck. They used to have that fire truck stationed in that little shed at (William 'Blootch' Nesbitt's, on the north side of Railroad Ave. (the 5th house from the corner). How long it was kept there, I don't know. They didn't have any place else to keep it.

I was with the fire department for 38 years."

The first Hamlin Fire Department three bay building was built in 1945. It was later enlarged to accommodate two additional trucks. It was razed and replaced in 1979, by the present nine bay fire hall. 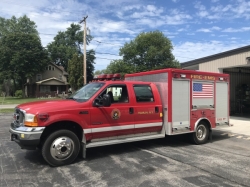 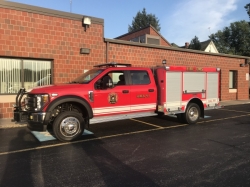 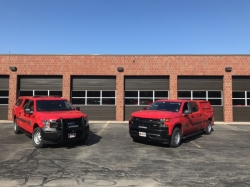 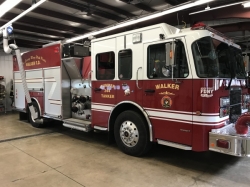 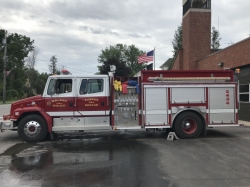 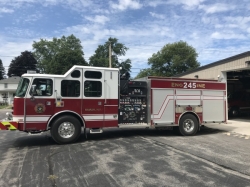 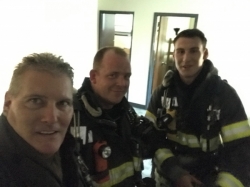 This site has been viewed 19,732 times.
Events
Pictures
Apparatus
FollowTweet
Maintained by the members and staff of Hamlin Morton Walker Fire District. Designated trademarks and brands are the property of their respective owners. Copyright © 2006-2022. YourFirstDue Inc. All Rights Reserved. Content on this web site is supplied by Hamlin Morton Walker Fire District. YourFirstDue Inc. cannot be held responsible or liable for any content, text, pictures, or any other media found on this web site.
Management login
Powered by